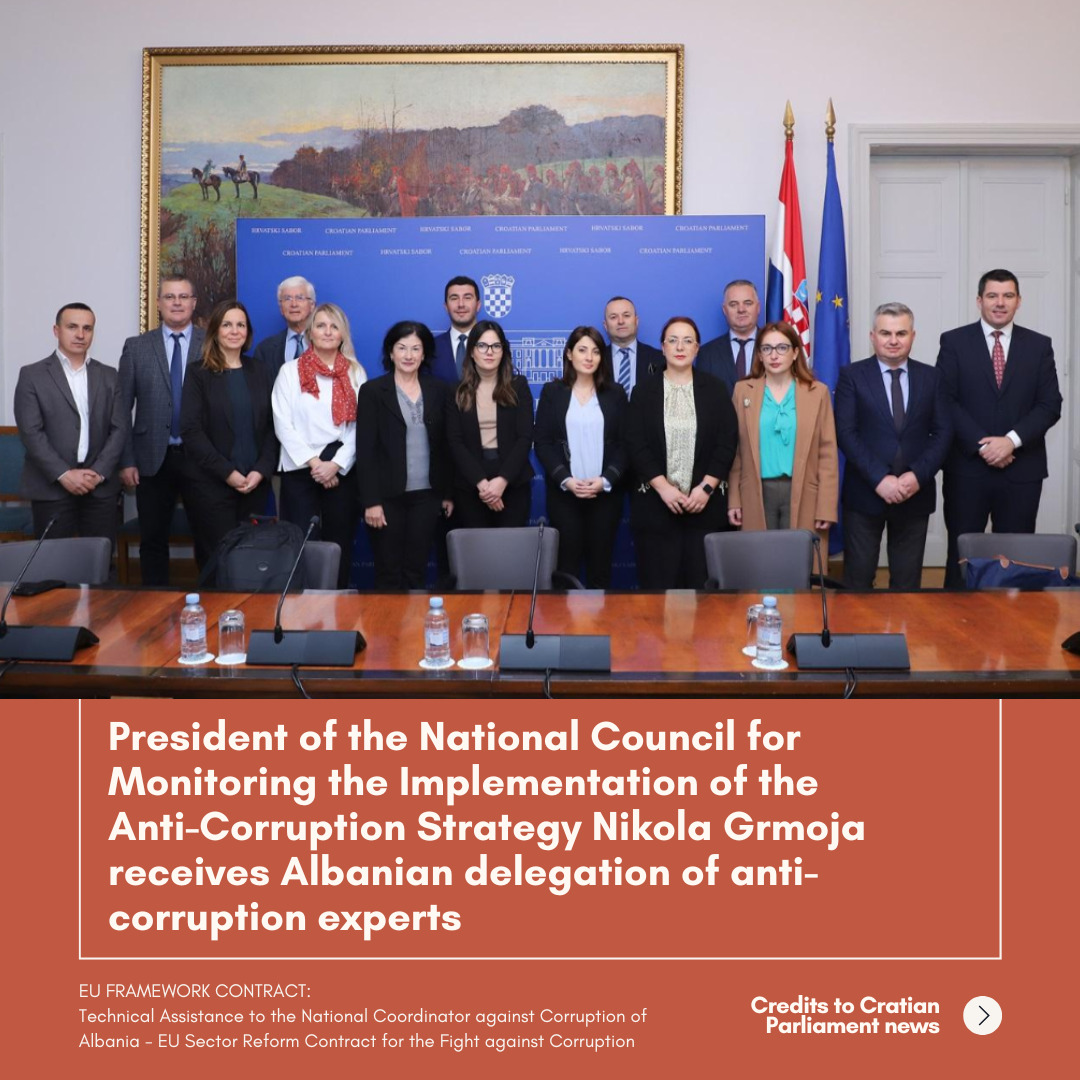 The Parliament of Croatia website has recently published an article regarding the meeting between Nikola Grmoja and ARS Progetti's Albanian delegation of anti-corruption experts, working within the EU Framework Contract "Technical Assistance to the National Coordinator against Corruption of Albania  - EU Sector Reform Contract for the Fight against Corruption"

Zagreb – President of the National Council for Monitoring the Implementation of the Anti-Corruption Strategy Nikola Grmoja received on Tuesday a group of Albanian anti-corruption experts who are on a two-day visit to Croatia as part of an EU-funded project, organized by the Ministry of Foreign and European Affairs. It was pointed out that the aim of the visit is to get acquainted with Croatian experience in the fight against corruption as well as information infrastructure and solutions that help institutions in anti-corruption activities.

As the President of the National Council noted in his introductory speech, this working body of the Croatian Parliament was established in 2006 to strengthen efforts in the fight against corruption and to take anti-corruption measures in the European integration pre-accession period. –The Council monitors the implementation of the Anti-Corruption Strategy, currently for the period 2021-2030, as well as the implementation of measures from the Action Plans adopted by the Croatian Government and implemented by ministries, agencies and other bodies, Grmoja said, adding that decisions are being made before the Council on how successfully these measures have been implemented. He also pointed out that one of the tasks of the body headed by is to make proposals for improving the fight against corruption and that, in accordance with the Rules of Procedure of the Council, public hearings and thematic sessions are held.

Speaking about digital tools in the fight against corruption, he stressed the importance of establishing a central place where all the data kept by Croatian state or official institutions will be found. –The point of this digital state bus is that all bodies use this data in the fight against corruption, but also that they serve citizens, and the Central State Office for the Development of the Digital Society will add an additional 30 registers to the state bus by the end of 2024, in addition to the basic register, such as income records of all citizens, the register of vessels and aircraft, the register of trades and others, grmoja emphasized. Furthermore, he noted that there are simple challenges in the implementation of digitalization because all state institutions do not have the same pace of its implementation and that EU funds finance new digital solutions, but not the modernization and upgrading of existing systems.

On behalf of the National Coordinator of the Fight against Corruption, Ministry of Justice of Albania, spoke his secretary Ismail Shehu, who also head edthe delegation, pointing out that Albania is investing great efforts and investing heavily in the digitalization of the system. –We strive to make services digitally available to citizens, and our goal is to reduce papers, waiting in lines as well as communication with the administration that we want to make as digital as possible and thus reduce the space for corruption, Shehu emphasized. He also said that Croatia's experience in implementing the e-File system in the judiciary is valuable to them, but also in general the establishment of a common single registry that would be used through a digitized system by all state institutions and withdraw the necessary data from it.

In the discussion, participants touched on a number of issues that have not yet been fully resolved, such as the issue of personal data protection or electronic voting. The Albanian delegation was particularly interested in the role of the National Council when it comes to reporting exposed corruption activities as well as proposing changes to legislation in this area, as well as prevention of corruption.

During the two-day stay, the delegation will also visit the Supreme Court, the Office for Suppression of Corruption and Organized Crime, the Ministry of Justice and Administration and the High Criminal Court.

Credits for this article to: Nikola Grmoja received the Albanian delegation of anti-corruption experts | Parliament of Croatia (sabor.hr)