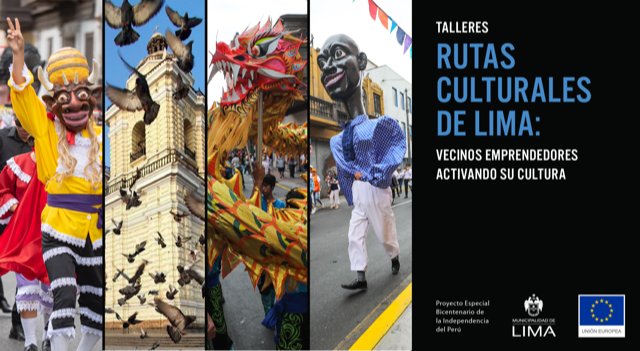 In the framework of the Technical Assistance project "Public-private partnership in the management of cultural heritage", which Ars Progetti has been implementing for the Delegation of the European Union in Peru, in coordination with the Culture Management of the Metropolitan Municipality of Lima, three workshops have been organised for the neighbours living in the neighbourhoods impacted by the project.

The project, also framed within the activities of the Special Project for the Bicentenary of the Independence of Peru, consists of the design and implementation of two routes: the Great Cultural Route of Lima and the Creole Route, two heritage routes that seek to strengthen the identity of the inhabitants of the Historic Centre of Lima and surrounding neighbourhoods and achieve social appropriation and pride in their heritage, both tangible and intangible. At the same time, the aim is to support the reactivation of the neighbourhoods through the businesses, enterprises, experiences and services that the residents themselves can offer along both routes.

Potential benefits for participants of these workshops include the dissemination of their ventures; technical support for their formulation and implementation; the creation of collaborative synergies and the establishment of value chains within the routes.

The second Neighbourhood Project Design Workshop, has been held on Saturday 27 March, in which interested neighbours who had already participated in the first Introduction and Presentation workshop on 6 March, discussed their project's level of progress, their needs versus their proposed solutions in relation to the two project routes. In the second workshop they received guidance from the technical team of Ars Progetti to work on their ideas and turn them into business proposals. Each group had a different timetable according to the phase of the proposal.

To get to know more about our activities, please visit our YouTube account at the following link: https://www.youtube.com/watch?v=Lcy39YiWpNE&list=PLQPoTbDKy44C1glTDKun2g-Q1vqo2UOtK